I've mostly preferred the Max Lange Attack: 5...Bc5 6 e5 d5 7 exf6 dxc4. The main line continues 8 Re1+ Be6 9 Ng5 Qd5 10 Nc3 Qf5 11 Nce4 0-0-0 12 g4 Qe5, reaching a very messy position. That's more like it. I like messy positions. Up to a point. What I really like is messy positions where my opponent hasn't already learned what to do. Mainline Sicilians, for instance, can be extremely messy but also mapped out to move thirty and beyond. I'm not interested in all that. Max Lange variations, too, go deep into the twenties, and I'm not interested in those either. Especially not when it's me who doesn't know what to do. 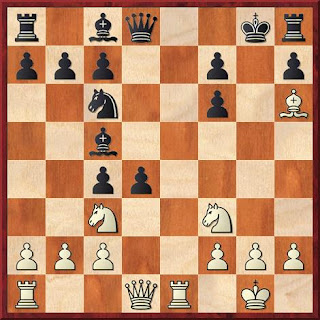 I got to test those “equal chances” in the game below. As it happens, my opponent did manage to find compensation, tried to mate me with rook, knight and king, and eventually took a draw by perpetual check. Nonetheless, today's engines give Black the advantage all the way through, even if I was unable to convert it at the time. Certainly I'd be happy to have another go.

That is if White doesn't avoid the whole thing by throwing in 8 fxg7 first.