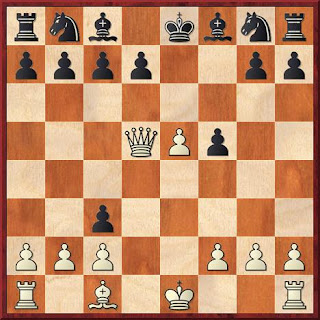 Posted by Jonathan at 12:34 No comments:

Back in the day, the Scotch Game was considered to be fairly harmless, because it resolves the situation in the centre “too soon”. The 13th World Champion overturned that assessment, and yet a modified form still has some validity: with the central tension resolved, it is hard for Black to direct the game away from established paths. From my own perspective, how on earth am I going to play ...f7-f5 here!?

That's not to say that the main lines of the Scotch don't lead to interesting games. They very often do. The Mieses Variation (4...Nf6 5 Nxc6 bxc6 6 e5 and so on), in particular, leads to complicated and unique positions. But post-Kasparov, they are now rather well explored; and even if I did once follow theory to move 38, I generally prefer openings where I can affect the course of play in the early stages, rather than battle on my opponent's territory. This proves to be quite tricky against the Scotch – unless, perhaps, you feel like trying Steinitz’ favourite response, 4...Qh4!?.

By centralizing the king's knight, White allows the black queen to take up a very active post, attacking the e4-pawn, which proves surprisingly difficult to defend: 5 f3 is illegal, 5 Bd3?? drops the knight on d4, while 5 Qd3 and 5 Nc3 are met by 5...Nf6 and 5...Bb4 respectively. Theory therefore recommends that White sacrifice the pawn for a lead in development.

In the 1990s GM Lev Gutman reinvestigated 4...Qh4 and published his findings in his book 4...Qh4 in the Scotch Game (Batsford 2001). In the critical line 5 Nc3 Bb4 6 Be2! Qxe4 7 Nb5 Bxc3+ 8 bxc3 Kd8 9 0-0 (which Steinitz never faced), Gutman highlighted 9...Nf6! as being the best continuation and, together with the German correspondence player, Peter Leisebein, strengthened Black's defences in a key game (Z.Azmaiparashvili-J.Hector, San Sebastian 1991) and elsewhere. 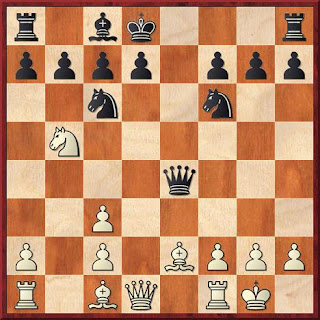 One move Gutman doesn't mention is the engines’ preference, 10 Nd4!?. It looks rather odd to retreat the knight again without waiting for ...a7-a6, but it's not such a bad idea. The knight has fulfilled its function on b5, forcing the black king to move sideways, so now returns to the centre. GM John Shaw picks up on this in his recent book Playing 1.e4: Caro-Kann, 1...e5 & Minor Lines (Quality Chess 2016) and writes: “For the sacrificed pawn, White has the bishop pair, much the safer king, a lead in development and a flowing initiative; all that is more than enough.” Quite so; 10 Nd4 offers White good practical chances.

All the same, Black is neither losing nor, it seems, significantly worse. I'm currently competing in a thematic round-robin tournament with 4...Qh4, eleven of the twenty games reached the position in the diagram, and five continued with 10 Nd4. Here's the first of them to finish (against the same opponent as in Game 2) – it ended in a draw. Can White improve? That remains to be seen.

Posted by Jonathan at 13:11 No comments: