In my previous post I mentioned that I've only ever had six OTB games with the Four Knights, and “it hardly seems worthwhile studying an opening that you only face once every five years”. The point is that there's actually quite a lot of theory on the Four Knights, especially if you meet 4 Bb5 with Rubinstein's 4...Nd4. If you can't be bothered to try and remember it all, the question is what to do other than 3...Nf6.

Alternatively, 3...g6 is a popular avoidance strategy; but as IM Andrei Obodchuk says in his book on the Four Knights (New in Chess 2011), this “is employed most often by stronger players against weaker opponents”, with the aim of outplaying them in less familiar positions. Whereas my 3 Nc3 opponents tend to be of comparable strength to me – or stronger. Outplaying them from a slightly inferior position is therefore not the most likely outcome. 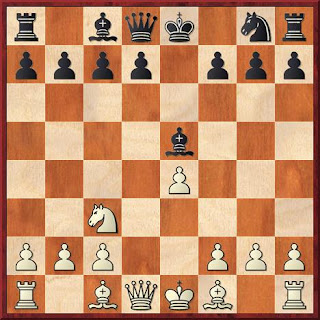 Back in 1993, Nunn wrote that “Examination of published theory gives the impression that this line is very bad for Black, which is probably true”. Or not. GM Oleg Romanishin has been playing 3...Bc5 for years with decent results (P24, W8, D10, L6 in the database); and as Obodchuk shows in his more serious investigation of the variation, it really isn't that bad at all. Even his various suggestions for White don't seem to trouble Black much since, if nothing else, they can often be circumvented.

Okay, I didn't in the end manage to win either game, but at least I enjoyed them a whole lot more.