030. Not All Rook Endgames are Drawn

In my earlier post ‘All Rook Endgames are Drawn’, I gave Tarrasch's famous maxim as meaning that “even quite favourable-looking rook endgames can be difficult to win, and sometimes they can't be won at all.”

And then sometimes they can, even if they're very difficult. Take this one: 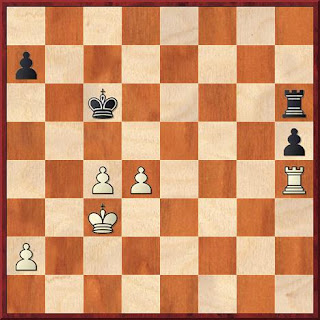 I played for this endgame from 20 moves out (with 15...Rg8 in fact), hoping to be able to hold it. Okay, at first sight it looks completely lost, doesn't it. Indeed, remove the a-pawns and the Lomonosov tablebases already declare mate in 54.

However, the two a-pawns complicate matters considerably. Not least that if White sends the king over to the h-pawn, Black may rush round in turn and win the white a-pawn. For instance, remove the a2- and h5-pawns from the diagram, place the pieces WRh5, WKg5, BRa2, and give Black the move – and Lomonosov now says “Draw”. Moreover, with the king on d6, Black can also throw in ...Rc8 to encourage the c- or d-pawn to advance, compromising White's connected pawn front.

So what can White do? Obviously he can't simply use the rook to support the pawns, since the black h-pawn then goes through. And putting the king on blockading duty is no good either, since the white rook can't force a pawn through by itself. The solution my opponent came up with was very deep, so deep that I didn't realize I was losing until he played his 52nd move.

Summarizing his plan (with the benefit of hindsight):

I've since gone through this entire endgame again to see if I could have improved anywhere – with a more cunning rook move perhaps, or by not playing ...a7-a6, say – and the answer seems to be “no”. White is still winning.

In which case, Black probably has to go right back to moves 10-13 and find something there. Or else on move three.

Posted by Jonathan at 15:10 No comments: