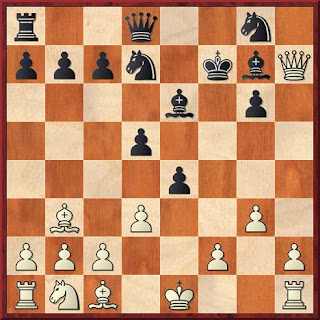 I'm currently competing in a Latvian Gambit tournament, all the games to start with 1 e4 e5 2 Nf3 f5. I've played the Latvian on and off over the board with reasonable results, and still bring it out in blitz chess from time to time. However, apart from 3 Bc4 which can arise via the Calabrese Counter-Gambit (1 e4 e5 2 Bc4 f5 3 Nf3), I've not looked at the theory in years, especially the state of the 3 Nxe5 Qf6 4 d4 d6 5 Nc4 fxe4 main line.

Well, I have to say that this seems now to be virtually unplayable for Black, so that anyone who manages to scramble a draw from this position has, I think, done very well. So far I've not managed to do that and have been crushed twice. From the other side, I am (or was) looking at two solid wins as White. My third opponent might well draw as Black (well done!), while I might draw my third game too (hurrah!).

All the same, just ½/3 and having to work extremely hard for it... No, I don't think I'll bother anymore, thanks. If it's really true that The Latvian Gambit Lives, as GM Tony Kosten entitled his second book on the opening (Batsford 2001), it's only with a finger or two keeping the coffin lid from being nailed shut.

In my final game as White, I went for Bronstein's 6 Be2, both for a change and because I've never been particularly happy facing this myself. Indeed, it all turned out very well for me, until my final move... 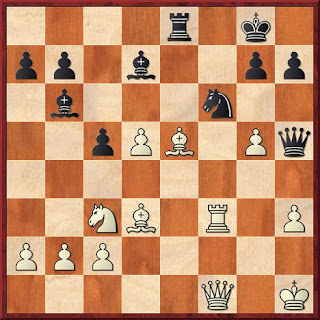 Fortunately, I only discovered my mistake when glancing over an email notifying me that my opponent had resigned, which of course was a terrible blunder too.

Naturally, I was both surprised (at my mistake) and pleased (that it hadn't immediately cost me the game), if more surprised than pleased. In fact “shocked” and “relieved” would be more to the point there. But at least it was first thing in the morning rather than last thing at night. Otherwise I might have been tossing and turning for hours.

Posted by Jonathan at 10:11 No comments: