Another main line Ruy Lopez, another sideline defence by Black, this time 10...Qd7!? in the Zaitsev Variation. 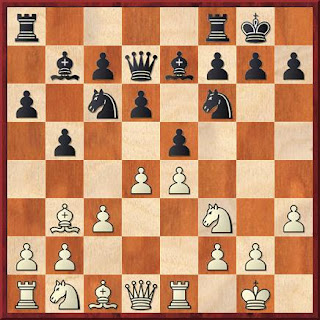 Searching MegaBase shows that Averbakh played this first (in 1962) and won, and Geller later won twice, albeit all against weaker opposition. More recently, GM Igor Kovalenko has tried it a couple of times, both winning and losing.

Which is perhaps the definition of a dubious opening. You play something "unusual", your opponent replies with natural, obvious moves, and you lose without ever having any chances at all. All very depressing.

But what does Stockfish have to say about it?

And that's a total yes. Stockfish would have played every single one of my moves. It did stall for a moment over two or three but quickly came round. In other words, the engine says it was a perfect game.

Posted by Jonathan at 10:14 No comments: