Back in 1993 (when I was reviewing books) I received a copy of Das angenommene Königsgambit mit 3.Sc3 by Volker Hergert & Alexander Bangiev (Schachverlag Reinhold Dreier). Translating for you, that means 1 e4 e5 2 f4 exf4 3 Nc3!?. I duly added this to my repertoire as White.

The obvious drawback to developing the b1-knight first is that Black can reply 3...Qh4+, forcing the white king to step forward. But it's the kind of move that amuses me – and sometimes my opponents too. 4 Ke2. Straight face. Eye contact. It often gets a laugh. 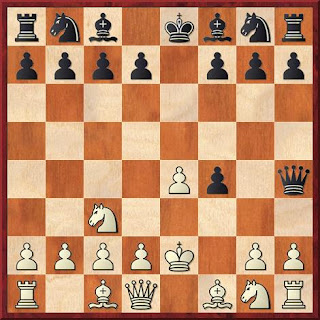 The thing about this sort of opening is that it's never quite as bad as it seems. For the inconvenience caused by the queen check, White aims to gain a nice pawn centre with d2-d4, while the king can seek sanctuary via f2 or d3-c2. Keres played 3 Nc3 regularly in his young days, and both Spassky and Bronstein won with it. More recently, IM Kamran Shirazi has brought it out occasionally; GM Richard Rapport used it to win an Austrian League game; even World Champions Garry Kasparov and Magnus Carlsen have tried it in blitz. My own OTB record (after 4 Ke2) is P15, W9, D3, L3.