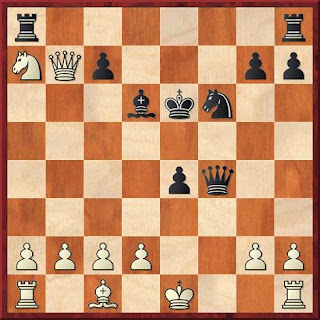 Black has sacrificed two pawns for a lead in development and strong counterplay against the white king. Obviously the black king is none too safe either, which (unfortunately) means that White can, if desired, just take a draw.

As it happens, I've recently had a spate of 10 Nxa7+s, facing it eight times in online games in 2018. And I've taken to hectoring my opponents, trying to discourage them from taking the draw. For instance:

Whether influenced by my comments or not, they've generally played the position on. And rightly so – in principle – because why play 10 Nxa7+ at all as White if you're just going to take a draw? What's to be learned from doing that? On the other hand, I should perhaps mention that, of the seven players who didn't take the draw, six have lost. That was quite a surprise to me, I must admit. I mean, I knew there were decent practical chances in these lines, but to score 6½/7 as Black!?

It's inadvertently given me more respect for the one person who ignored my remarks and took the draw:

15. Raffzahn: offered a draw - Please use the Accept Draw or Decline Draw buttons to accept or decline the offer.

I declined and played on:

15. tsmenace: it's your move :) - obviously you can force a draw if you want one

My opponent was determined. So – a draw. Well done.