Whether or not an opening, or a variation of an opening, is a surprise naturally depends on whether an opponent expects it or is otherwise prepared. In an information-neutral context – i.e. without knowledge of someone's repertoire or, conversely, their knowledge of your own – the element of surprise can therefore be a matter of chance. My openings tend towards the disreputable, so they tend to have decent surprise value – most pleasingly demonstrated when an opponent starts thinking on move four.

In the blog-relevant C20-C99 category, there are surprises too: 1 e4 e5 2 Nf3 d5!? (three games), 1 e4 e5 2 Nf3 Nc6 3 Bb5 a6 4 Ba4 f5!? (three games). I don't remember those either, especially the three Elephants. The games with the Schliemann Deferred (all from 2002) are slightly less surprising. I have occasionally played this over the board, usually aiming to take opponents (who might be ready for 3...f5) away from standard paths, since the seemingly benign inclusion of ...a7-a6 and Ba4 actually changes the position considerably. To obtain an advantage White has to play 5 d4 (a sideline in the Schliemann itself), and if 5...exd4 then 6 e5 with a favourable sort of reversed Falkbeer. I see that one of my CC games did go this way – and I lost – so whatever new ideas I might have had probably weren't very good. I'll have to look at that again sometime. 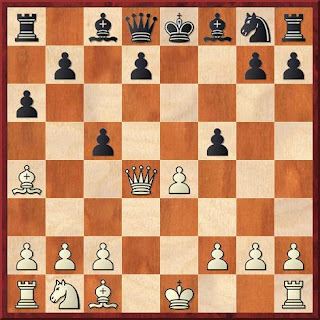 Here the obvious threat to the a4-bishop (with ...b7-b5 etc) enables Black to escape the opening with a satisfactory position. This increased by degrees in the middlegame, and reduced more sharply in the endgame, until my opponent (now an OTB IM) was rightly justified in offering a draw (at move 35), which I declined – a decision equally and instantly justified when they blundered by reply. Sorry, Jack.

Posted by Jonathan at 16:37 No comments: 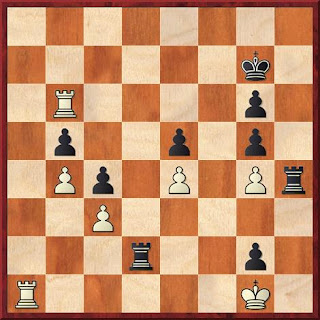 Posted by Jonathan at 18:35 No comments: