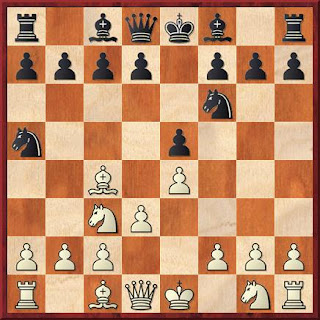 Checking that statement against my own praxis, I came across the game below – which began as a Bishop's Opening: 2 Bc4 Nc6 3 Nc3 etc – where I managed to create problems for myself with an impatient break in the centre (12...d5!?), as my opponent's accurate moves demonstrated (14 Nb5!, 17 Kb1!). I later drew anyway after an exchange sacrifice (31...Bxg3!?) for a near-fortress on the light squares.

Not so long ago, when Korchnoi had already become a serious contender for the world crown, I happened to ask him: “Why don't you play the Two Knights’ any more these days?” The grandmaster looked at me in amazement and muttered: “Because of
6...N-QR4, of course. You mean to say you didn't know that yourself?”

And 6...Na5 there still seems fine for Black, as with 4...Na5 here. So why does no one (much) play the Vienna/Bishop's Opening hybrid any more these days? Because of
4...N-QR4, of course. You mean to say you didn't know that yourself?