An opening sacrifice (8...0-0!?) – first seen in G.Sanakoev-J.Boey, 10th World Correspondence Championship 1978 – gave me good play for a pawn in the early middlegame, which developed successively into a strong initiative, a material advantage, and (after 47...h4!) a winning endgame with queen vs. rook and pawn. 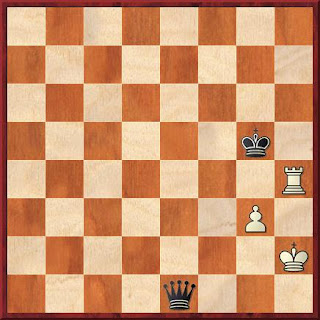 The Shredder endgame database gives this as mate in 50. I spent a long time trying to understand why this is so, searching MegaBase for similar positions, and getting my endgame books down from the shelf.

GM Karsten Müller & IM Frank Lamprecht (Fundamental Chess Endings, Gambit 2001) write: “If the pawn is on its original square or if it is a knight's pawn the position is drawn, as long as the attacking king is cut off and can't get behind the pawn.”

And yet Shredder says I'm winning. Well, the authors are not wrong in what they say about the g-pawn, since they give the necessary proviso: if the attacking king cannot get behind the pawn. But it certainly doesn't look as if it can from the diagram.

The crucial stages are as follows:

Incidentally, the Lomonosov tablebases show that the win can be considerably shortened by refusing the a-pawn on move 39. Apparently, 39...Qxa4 (its sixth choice) is mate in 59, whereas 39...Qe3! and 39...Qf7! are both mate in 37. I rejected those for two reasons:
1. White could have forced the game position by playing 39 Rf2 first.
2. Why on earth would Black refuse the pawn? I'd never refuse the pawn over the board.

Except that now I might. The a-pawn is not going anywhere. Yes, White can defend it with the rook, forcing the queen to blockade it for the moment. But when the black h-pawn comes up the board, White will then have to take it with the g-pawn, giving him two rook's pawns – until one of them drops off, after which he'll only have a rook's pawn, and on an unfavourable square, making the win that much more straightforward.