As in the Double Muzio, the practical difficulty for Black is in defending against threats which mount very quickly on the f-file. The problem for White is in obtaining anything more from this than a draw. Indeed, Black could have forced one by playing 10...Ke6, after which White has nothing better than to repeat with 11 Qe5+ Kf7 12 Qh5+ etc. But supposing Black doesn't want that, what then? Then interesting things can happen.

In the following game, 13 Qh6+ was my prepared novelty. I had drawn ten years earlier with 12 Na3 Nf6 13 Bh6+ Kg8 14 Qg5+ and so on. Later, the Russian player (and future CC-SIM) Enver Efendiev did substantially better after 12 Nc3, winning two very short miniatures (including one against my previous opponent); but neither of those featured 12...Nf6. 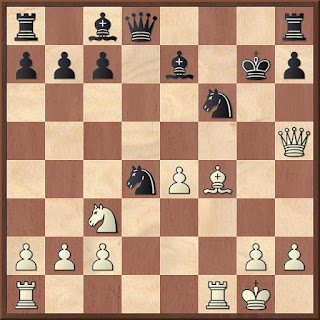 Okay, it's probably true that White doesn't have anything after 13 Qh6+ Kf7 14 Be5 either. Houdini resolutely declares it “0.00” and two other games have ended in two more draws after 14...Bg4!. All the same, I think the Rosentreter (with 5 Bxf4), which I first played in 1989, is worth an occasional punt. The lack of any immediate threats allows Black a rather confusing freedom, and in such cases you can easily find that you've put your pieces on the wrong squares. And then it's often too late.

In my game below it is only when we reach move twenty that the engine starts to see some promise in White's position. Even if it's not necessarily all over for Black at this point, it's certainly much easier to play White. Just keep moving forwards. At the end, Black had presumably worked out that he would soon lose a lot of material and so resigned. I'd have played it out myself, but I quite understand the feeling of not wanting to look at a game anymore.