Most correspondence chess nowadays is conducted on online servers. Rather than replying to your opponent in hard or electronic format, as we used to do, you go and make your move on an actual board. The advantages of this method are significant: there is no chance of moves going astray, the time used for “thinking” is clear, and those errors unique to correspondence chess, such as writing your move down wrong, are ruled out. Obviously, human stupidity can never be prevented entirely; input errors are still possible.

The (Gary) Koshnitsky Memorial was played by email, using international numerical notation. In this system the squares on a chessboard are each given a two-digit code according to its file (1-8; replacing the usual algebraic a-h) and rank (1-8 as well), so that the square f3, for instance, is now 63. Making moves involved sending a four-figure number: the first two digits denoting the starting square of the piece or pawn you want to move, the second two digits indicating its destination. Thus 1 e4 would be sent as 5254.

International numerical was standard for international correspondence games, because different countries have different initials for the pieces arising from their different languages: such that a bishop is B in English, but A (alfil) in Spanish, C (слон) in Russian, F (fou) in French, L (läufer) in German, and so on. Using numbers rather than letters eliminates those discrepancies. The slight drawback in human terms is that moves are harder to visualize. 1 Nf3 may be immediately appreciable, but 7163 you have to think about for a moment. In the game below I failed to visualize a move correctly and duly made a numerical error. 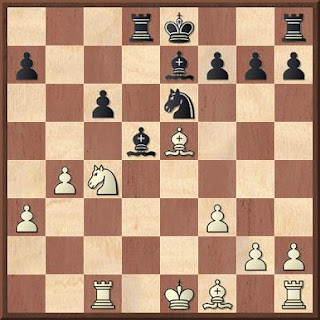 Fortunately, that was my only loss in the tournament and I finished in joint second place, with a nice win against OTB GM Colin McNab along the way, and received a cheque for a pleasant amount of Australian dollars. I also, as I discovered years later, achieved a CC GM norm in the process. Damn, if I'd realized that at the time I might have tried to get another one. Nevertheless, I can't quite regard this as a missed opportunity, since in my next major tournament I came last.