015. Losing From Both Sides

In his recent, entertaining book, Your Opponent is Overrated (Everyman 2016), James Schuyler tells of a series of bets he had with Alex Sherzer:

That story reminds me, in reverse, of Bogoljubow's boast: “When I am White I win because I am White; when I am Black I win because I am Bogoljubow!” Even for me there are certain positions, certain openings, where I expect to win with either colour, but okay, the starting position is not one of them. And there are occasions when I have lost positions from both sides.

In another main line Zaitsev Ruy Lopez (as seen earlier in the Rorschach Knight), the following position (after 28 Qc2) has arisen in two of my games. 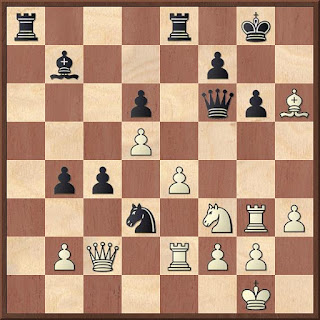 In that game I should have accepted that White had no advantage and opted for 33 Nf6+ Kg8 34 Bxd2. Or else 31 Qc3 anyway, at which point a draw was agreed in R.Bocanegra Moreno-I.Cavajda, correspondence 2010. 29...Nxe5 is also fine for Black, as seen in V.Palciauskas-A.Lanc, 13th CC Olympiad 2004 (which took place later than the 14th Olympiad, since this one was being played by post rather than email).

Sigh. What can I say? When I am White or Black I lose because... it seems I don't really understand chess at all.