If you've ever clicked on my profile, you'll have read the words: “genderqueer femme”. In short, that means my gender is “queer” in some unspecified way, qualified by the placement “femme” within the butch/femme spectrum. To explain that in long would mean a conversation and likely some more reading on your part.

And what does it have to do with chess anyway? Not very much. Neither gender, nor sex, is a serious indicator of inherent chess ability. (Nuts to Nigel Short.)

But there is one instance where chess and non-normative gender collide, and that's the Transvestite Attack. This was an invention of US player Jack Young, and involves the moves 1 e3, 2 Ke2, 3 Qe1, 4 Kd1, whereupon White's king and queen are on each other's squares, wearing each other's clothes, as it were.

Obviously White's set-up has no merit whatsoever. On completing the manoeuvre White is clearly worse, having wasted three tempi with the royalty, and is now unable to castle. But it seems Jack's thing was to see what he could get away with. Hence a few characteristically silly moves, given a name for posterity, and start the game from there. It helped that he was (is?) quite a decent player, rated USCF 2261 in 1988.

In this sequence the white king has to go to e2, and is going to have to move again; challenging queens with Qe1 is then often useful for White; and retreating the king to d1 frees the light-squared bishop. This situation has occurred several times in my praxis. Each time, Qe1 and Kd1 were actually correct and led to an advantage for me (even if I didn't always follow them up correctly). The game below is one example. (I've included another, more recent one in the notes.) 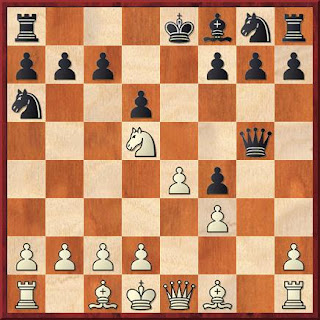 Here 9 Kd1 has uncovered an attack on the a6-knight, which is defending the c7-pawn. A further threat is 10 d4, regaining the f4-pawn with advantage. Black has no satisfactory way to solve these problems. Captain Transvestite strikes again!