Once upon a time, when people used to play 1...e5 against me (which no one has done OTB for three years now), I got to utilize a lot of "unexpected" variations in the King's Gambit. One of these was the Rosentreter: 2...exf4 3 Nf3 g5 4 d4!?, intending 4...g4 5 Bxf4 gxf3 6 Qxf3 with practical chances (see here, for instance), based on the fact that Black has no pieces out at all. 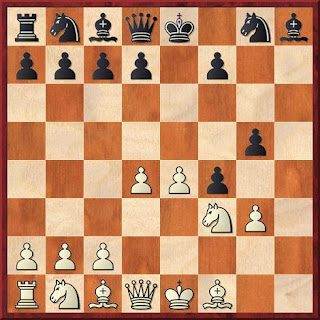 I used to do quite well with this line (8...g4 9 Nh2! is the main point), even against FIDE titled (or future titled) players, such as: Gregory Kaidanov, Mark Hebden, James Cobb, and Robert Eames. My opponent in the game below, Craig Thomson, has a title too (he's an FM – whether at the time or later, I'm not sure), though the Becker wasn't a surprise to him because he started it off with 3...h6. (In any case, the element of surprise tends to be more potent in rapid chess than postal chess.) All the same, he didn't manage to defend correctly, and I won – as I thought then – a nice game.

They feel like days of innocence now. Neither that game, nor any of the others mentioned, stands up to engine scrutiny – especially the one against Hebden, which exemplifies Tartakower's maxim: that the player who wins is the player who makes the next-to-last mistake; i.e. it didn't matter that Hebden blundered first (17...Qf5??), nor that several other moves by both sides were also blunders, because I blundered last (38 Bf4??) and therefore lost.

If there's a reason I stopped playing 5 h4 and 8 g3, I've forgotten what it was. Maybe there wasn't a reason. Today, Stockfish gives Black the edge, but not fatally so. Or as John Shaw put it in his book: “The King's Gambit – not quite as stupid as it looks.” On the other hand, on the few occasions in recent years I've gotten as far as 2...exf4 as White, I've only played 3 Nf3 twice. Coincidentally, the last of those was against Hebden again (in 2016), where he blundered first again, and won again. Some things never change.