“If you find a good move, look for a better one” (as Emanuel Lasker apparently didn't say). It's a good maxim for correspondence chess, where you can spend all the time you like looking for better moves. Over the board, on the other hand, I usually opt for the practical “one win is as good as another” strategy. And sometimes this lazy attitude affects my Fernschach as well.

With fewer people signing up for my thematics at ChessWorld.net nowadays, I recently entered a couple of ordinary tournaments instead: a four-player round robin and a knockout with 64 players. In my own events I restrict the strength (or rather weakness) of my opponents by setting a lower limit on rating. The ordinaries are open tournaments, in other words anyone can enter. In the first round of the knockout I was drawn against someone nearly 1400 points lower rated than me. The first three moves were 1 e4 e5 2 f4 d6 3 Nc3 f6, after which I went into "simul" mode: come to the board, make a quick move, and go away again.

Now I'm regretting it because the engine shows that I failed to spot a pretty queen sacrifice leading to an unusual mate: 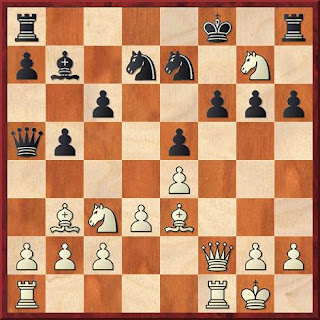 Damn, that would have been really nice.