031. Some Bishop Endgames are Drawn

The game below features the complicated line of the Vienna (1 e4 e5 2 Nc3) known as the Frankenstein-Dracula Variation, in which repeated threats to mate on f7 force Black to surrender the a8-rook. Compensation comes in the form of a long-term initiative, with Black's active minor pieces enhanced by the exposed enemy queen, while the white rooks sit passively on their starting squares.

17...N6f5 was a novelty, "improving" on an OTB game by the 15th World Correspondence Champion, Gert Jan Timmerman. I put improving in ironic quote marks there because I'm not sure whether it is an improvement or not. Gert is both a stronger player than me and understands the Frankenstein-Dracula much better. He once referred to one of my games as an example of how not to play the variation as Black. As he put it: “Tait was looking for a tactical solution, whereas a long-term positional approach is called for.”

Well, anyway, 17...N6f5 led to interesting play – it was the Frankenstein-Dracula Variation after all – as I rushed my g-pawn down the board, further kicking the white queen about, and eventually regained the sacrificed exchange at the cost of a pawn. Then my fun ended and I was left having to defend a queen and opposite-coloured bishop endgame still a pawn down. (It seems I had been looking for a tactical solution again, whereas...) 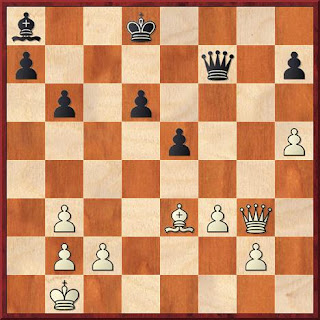 The obvious way to draw this position is to try and swap the queens off. After some careful reorganizing, I finally managed to prompt that by allowing the a7-pawn to fall. Not all opposite-coloured bishop endgames are drawn, but this one was.

I did wake up in the early hours suddenly worried that the white king might sneak round the back and enable a breakthrough with b2-b3 and c3-c4, but a few minutes with my magnetic chess set showed these to be nighttime fears, and I soon went back to sleep.