The main point of Georgi Popov's 3...a5!? defence to the Ruy Lopez is to follow up with 4...Na7 5 Bc4 b5, gaining the usual queenside space for Black while driving the Lopez bishop away – and trapping it should it drop back to b3. White's 4 d3 in the game below is therefore quite obliging as it blocks a retreat to the centre. Thus 4...Na7 5 Bc4 b5 (etc) and the bishop is lost. 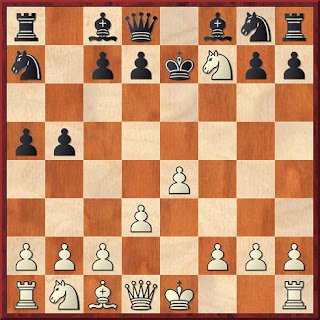 I don't recall ever seeing a similar idea before: White gives up two pieces on f7 in order to win an unprotected rook on a8 with queen checks. Later on he surprised me again by putting his other bishop en prise to a pawn (21 Bd6).

Going over the game with Houdini now, it seems neither of these surprises is particularly good for White. The engine prefers the bishop and knight to White's rook and two pawns in the first instance. In the second, it suggests that Black simply takes the piece: 21...cxd6 22 Nxd6 Nf4 and then answer 23 Nxc8 with 23...Nxg2!, which looks very strong. Whether I actually considered that, I'm unable to tell, since the game is somehow missing from my cardboard Postal Games 1996-98 folder.

What I do remember is feeling unsettled, unable wholly to trust my assessments throughout the game. In the end, I went completely wrong (31...Ng7?) and lost.

It might be assumed that emotions don't much matter in correspondence chess. On receiving a shock, for instance, you don't have to find a reply right there with the clock ticking. You can let your feelings subside before studying a position... calmly, rationally... two or three days later maybe. But it can be difficult all the same. An underlying sense of unease, that you're not in control, that things are going wrong, can pervade a whole game, and is no less disturbing for being long drawn out.

Or so I have found anyway. Your mileage may vary.