013. Winning With Someone Else's Moves

One of the benefits of studying openings is that you can, very occasionally, win games with moves you've worked out entirely at home. Or even with someone else's moves that you've just remembered. My most notable instance was against Colin Crouch at the 1990 Nottingham Congress. In a sharp line of the French, Black answered a classic bishop sacrifice on h7 by giving up his queen for three pieces. This was reckoned at one time to offer Black good play but had since been refuted in the game S.Szilagyi-T.Harding, ICCF World Cup 1986. Colin helpfully played straight down this line, stopped, thought for an hour, and then resigned – and a move sooner than in Szilagyi-Harding, so I didn't have to think of a single move for myself.

This hardly ever happens to me in over the board chess anymore. For one thing, I mostly avoid theoretical main lines nowadays; and, for another, I usually find I've forgotten most of my home analysis, even in my own pet lines. In correspondence chess, it's a different matter. With everything written down (or entered on ChessBase), I do still win games where most of my moves have been worked out (and computer checked) in advance. And it's possible to win games with someone else's moves too. 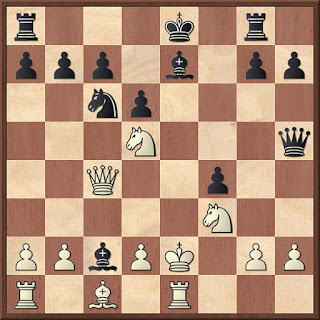 This was picked up later (2004) by Thomas Johansson, but did not make it into general circulation. For instance, the one-volume encyclopaedia Nunn's Chess Openings (Everyman, Gambit 1999) stops at 13 Ke2, with an exclamation mark and the symbol denoting that “White is much better”.

So, so far I've won three times as Black after 13 Ke2. The game below was the shortest – and in that one, too, I didn't have to think of a single move for myself.