Not only did we used to play chess by post – with cards, envelopes, stamps and so forth – we used to correspond about chess by post as well. My two most regular correspondees, both now deceased, were Otto Hardy and Donald Andrew. Otto was a significant opening theoretician and his letters were full of his own games and analysis, of which I still have three files worth. Donald was... well, I'm not sure what Donald was exactly. Perhaps the most apt word is “enthusiast”. Donald used to collect other players’ game scores and pick their brains about opening analysis. As well as me, I think he also wrote to and received stuff from Jeff Horner and John Littlewood, and very likely there were more of us. For services rendered, as it were, Donald used to send me an occasional book of first class stamps, which I used for my postal games.

Googling today, I discover that Donald was Yorkshire Champion in 1949, came joint second in the British Major Open the same year and, much later, was joint British Senior Champion (in 1985). A game of his features in the updated edition of John Littlewood's book How to Play the Middle Game in Chess (Batsford 2001), where John wrote:

[I]nexperienced players have somehow acquired the erroneous belief that middle games with opposite-coloured bishops are also drawish. Nothing could be further from the truth! In fact, I am tempted to generalize by stating that, in middle game situations, opposite-coloured bishops tend to unbalance play and tilt it even more in the favour of the player with the initiative. As an instructive example of this, I quote a correspondence game played recently by an old friend of mine, Donald Andrew:

I never actually met Donald in person, but I played him five times in BCCA tournaments. All the games were drawn. The first of these followed (or rather, transposed to) the same line of the Two Knights Defence as the one above, until Black deviated at move seven. As it happens, Donald could have gone for opposite-coloured bishops in our game too. 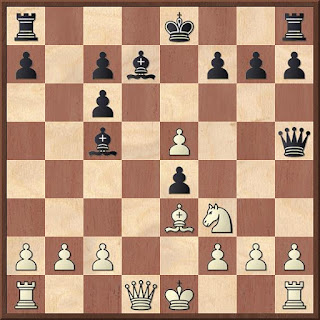