Pattern recognition is a significant factor in chess. This has actually been tested. Set up a normal position on the board, get someone to look at it for, say, ten seconds and then ask them to reproduce the position from memory. It turns out, in general, that the stronger the player, the better they succeed. That's because they have an increasingly larger memory base of categorized patterns.

Take, for instance, the following configuration on the black side: Kg8, Rf8, Bg7, Nf6, Pf7, Pg6, Ph7. Show that to a chess player, almost irrespective of strength, and they'll immediately notice that Black has castled behind a kingside fianchetto. That unitary formation could then be reproduced on the board in a few seconds. But to a non-chess player, it has no meaning; it's just seven items to be remembered more-or-less independently.

Now build it up into a position from a main line Classical King's Indian. The patterns in this much more complicated array are still readily appreciable to anyone who knows the opening: the arrangement of the two kingsides, the central pawn structure, the standard procedures of attack and defence on each flank. That's now perhaps five or six things for a chess player to recall, each of them interconnected. Whereas a non-chess player may have to try and remember 32, each piece and pawn individually, with no overarching principles to guide them. Dump everything randomly across the board, on the other hand, and chess players fare little better, because there are no familiar patterns for them to discern.

But the game below isn't really about any of that. The pattern arising after White's 21st move is not a particularly common one for chess players to recognize; it's just rather pleasing in its geometry. 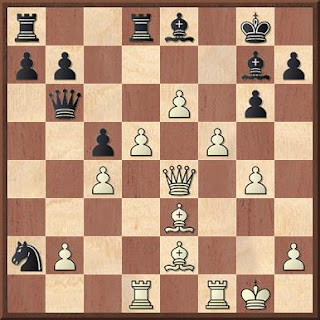 Cochrane's Gambit gave White two pawns for a piece, which have now been assembled in a flying wedge. From Wikipedia: “This V-shaped arrangement began as a successful military strategy in ancient times when infantry units would move forward in wedge formations to smash through an enemy's lines.” The symmetrical white pawns have certainly done that. Better still, the white pieces are arranged symmetrically too: queen and bishops lined up behind the lead pawn, the rooks each behind the secondaries. Even the outlying b- and h-pawns hang back in proportion. (For the king to be sitting on e1 as well would probably be asking too much.) Meanwhile Black's forces seem indeed to be scattered randomly about the board. That doesn't necessarily mean that Black is losing, but he is.

Having set up their wedge, the white pawns rested for a little while... until the f-pawn (okay, strictly speaking, the g-pawn) moved forward to join its colleague on the sixth rank, at which point Black resigned.