The Senior International Master title was, if I remember correctly, created so that CC-IMs would have something else to play for, at a time when there were limited opportunities to make GM norms. I was a beneficiary of this myself. Even if, as with the IM title, I can't remember exactly how I qualified. Searching my databases I see I did have three further decent results in the years 1998-2002.

These were:
For a total score of +12 from 31 games, and without a single loss.

Previous posts already feature the North Sea Tournament (Game 28 and Game 31) and the Olympiad (Game 4), so here's a game from the European Teams. It has me on the White side of a Petroff.

I can't remember anything about this game. My notes have various “+= Nunn” assessments in the opening, from where I'm not sure. Possibly NCO, if it was out by then. There's also an obscure reference to E.Mnatsakanian-V.Maslov, USSR Spartakiad, Moscow 1963. 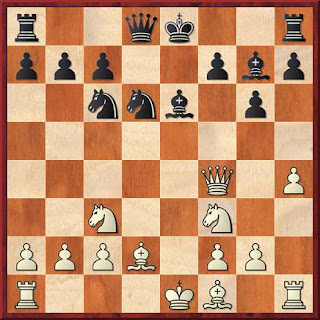 The natural 11 h5 was a novelty, against which my opponent enterprisingly castled short. It's not actually as bad as it looks, at least not with Stockfish in charge of the black pieces. Fortunately, Bjørn didn't have a rating of 3400+, and his queenside counterattack was ultimately unsuccessful.

Playing it through again now prompts no recollection either. My memory is not what it was. I had a game in the Sheffield Summer League a week or so ago which followed the same path as one against the same opponent three weeks earlier. Presumably he'd prepared something for me. If so, he was probably disappointed when I deviated early. But that wasn't due to any foresight or caution on my part. I'd simply forgotten what we'd played before and inadvertently went a different way on move eight.

Amnesia does have some advantages. Regrets, I've had a few, but then again...
I've forgotten what they were.