033. Another Grandmaster to the Rescue

So I switched to 2...Nc6. Then if 3 Bc4 or 3 g3, Black still has options of a counter-attacking ...f7-f5, while 3 f4 is now far more risky for White due to 3...exf4!. On the other hand, it's very sharp, so you need to be prepared as Black. Eighteen months ago in the Notts League, I faced an unexpected Hamppe-Allgaier Gambit: 4 Nf3 g5 5 h4 g4 6 Ng5 h6 7 Nxf7 Kxf7, and I hadn't studied this in years. Fortunately, nor it seems had my opponent and we played a wholly incorrect game, ending in a draw.

All good – but there's also 9 gxf3, which I noticed scores over 85% for White in the databases. What does Black do against that? Grandmaster Bologan rides to the rescue! In the database games (dating back to I.Gunsberg-G.Mackenzie, London 1886) Black always played 9...Be7, whereas Bologan follows his theme:

I got to try this out in a Vienna Gambit thematic. I actually commented: “not sure whether this idea of Bologan's really gives Black any serioius [sic] winning chances, but we'll see”. It turned out to be far stronger for Black than I'd thought. The forcing 15 dxe5 Qxe5+ 16 Qe2 Qg3+ 17 Qf2 Re8+ 18 Kf1 Qxf2+ 19 Kxf2 reaches a critical position. 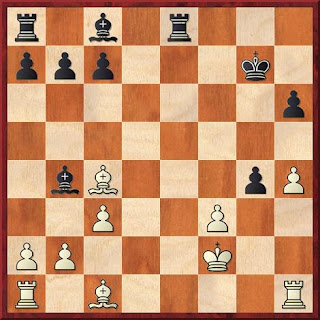 Here it seems logical to target the white king on the open lines after 19...Bd6, but I couldn't see any conclusive way forward. So I decided to close the position instead with 19...Bc5+! 20 Kg3 Bd6+! 21 f4 h5, relying on the protected passed g-pawn as a long-term asset, and aiming eventually to get in behind and cause damage with a rook. Although White is only a couple of moves from bringing his own rooks out and challenging for the open files, it's surprisingly difficult for him to consolidate a defence.

In the end I managed to infiltrate via the pleasing manoeuvre ...Re5-c5-a5-a6-b6-b3, after which the game didn't last much longer.