032. Grandmasters to the Rescue

I hate it when grandmasters start playing my pet lines. It means other grandmasters work out effective responses, which filter down to my level, so that my opponents are no longer surprised and can just learn how to reach sensible positions. The prime example is Chigorin's Defence, 1 d4 d5 2 c4 Nc6!?.

Back in 1982 when IM John Watson wrote his pioneering book on the Chigorin, it seemed nobody really much took notice. I was able to develop a whole repertoire involving ...d7-d5 and ...Nc6 against both 1 d4 and 1 Nf3, securing dynamic play for Black in positions where my opponents mostly had to think for themselves.

And then Alexander Morozevich took it up. Sorting my Chigorin database by Elo now lists a whole string of grandmasters on the black side (if only occasionally), including Carlsen, Kramnik, Ivanchuk, Mamedyarov, Ponomariov, Rapport, Short, Moiseenko, Miladinovic... Not that GM Morozevich need care about that. The Chigorin was a useful weapon for him for a time and led to a lot of interesting games, but he's hardly played it in years. Bah.

Another apparent case is the Jaenisch. Sorting that database reveals a similar sort of list: Carlsen, Aronian, Radjabov, Ivanchuk, Zvjaginsev, Nisipeanu, Azarov, I.Sokolov, Nyback, Pruijssers, and so on. But this time I don't mind so much. The lines they play aren't in general the lines I play. After 4 Nc3, for instance, GMs tend nowadays to go for Tartakower's 4...fxe4 5 Nxe4 Nf6, whereas I have always favoured 5...d5. And I'm so well versed in the theory that when grandmaster games do venture into my territory I am better able to appraise their value.

But here elite grandmasters have come to the rescue. In his book The Ruy Lopez Revisited (New in Chess 2009), GM Ivan Sokolov directed attention to 11...Qf5!?. 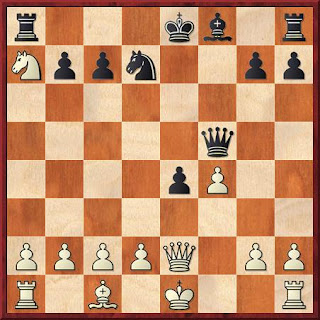 Other players have since refined and strengthened Sokolov's analysis; and in a critical line, 12 Nb5 0-0-0 13 a4, GM Liviu-Dieter Nisipeanu brought out 13...Bb4! (improving on Sokolov's 13...Bc5). The game A.Nekhaev-Nisipeanu, correspondence 2012, is annotated in detail in Junior Tay's new book, The Schliemann Defence: Move By Move (Everyman 2018), which I worked on as editor.

One continuation Junior doesn't mention is 12 Nb5 0-0-0 13 Nc3. No one had ever played this, and Sokolov hardly mentions it either, writing only that “13...Bc5, followed by ...Rhe8, ...Nf6 gives Black nice compensation.” So the game below has some small theoretical value. I did manage to find some nice compensation, just as Sokolov had indicated – and some dubious knight moves by my opponent (moves 23-25) even allowed me to go on and win. Hurrah for the grandmasters!