054. Playing On ’Til Checkmate

There are always a few players who don't or won't resign in utterly lost positions but carry on ’til checkmate. Or, very often, the move just before checkmate. And that's fine.

In correspondence chess, back when we played by post, it was annoying because you were forced to waste money on stamps sending unnecessary moves back and forth. Your opponents might thus consider themselves slightly revenged on having been beaten, albeit at the cost of their own stamps and reputation.

In online server games pecuniary penalties do not apply, so the only effect of playing on is to postpone an inevitable result for as long as possible – a strategy which can, if desired, be further extended by not replying until the very end of the time limit for each move.

Take the game below, for instance. At move 22, Black's extra bishop and knight are better than White's extra rook and pawn. At move 46, I assessed my position as winning. And by move 65 I thought it was time for Black to resign. My opponent opted to play on for another nineteen moves, ’til just before checkmate.

No worries. I got to look at my happily won position for significantly longer, make an aesthetically pleasing bishop retreat to the far corner, with zugzwang, and deliver mate with a pawn. Or nearly. 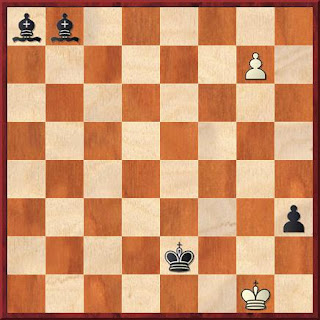 And sometimes I'll carry on in losing positions myself – if I want the game to resolve in a particular way to my own satisfaction. And I like my opponents to do likewise. I prefer some things to be played out rather than "left in the notes". Sometimes I'll play on ’til mate too – if it's going to be a nice one, say, and will happen soon. Such as in Game 35. Anyone can play any position on if they want to, and for whatever reason.

As it happens, another of my games (against the same opponent) is going the same way. I'm currently a rook up with a passed f-pawn one square from promotion. At one move per week (I usually reply straight away), if the game runs its full course we'll be enjoying it for three months yet. One of us will anyway.