I can't remember why I started playing correspondence chess. Likely I picked up a leaflet somewhere and decided to send it off. After playing chess as a junior – and packing it in at secondary school – I returned to it again in 1985 when the local chess club (Mansfield) suddenly turned up in my regular, the now defunct Stag & Pheasant (which is not the Wetherspoons of the same name). Three years later I entered the BCCA pyramid tournament for the first time.

By then my OTB rating was 163, which meant I was placed directly in a Major section, two divisions below the Championship. All-play-all, both colours, five opponents, ten games. I won nine. Going through them with Stockfish thirty years on, the engine inevitably points out a few mistakes but surprisingly few serious ones by me. It seems I actually played quite well (see here, for instance). Except in the game below. 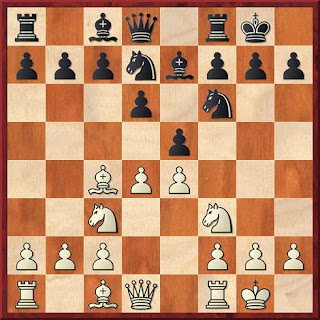 I've faced this (Hanham) system twice as White and lost both times (once OTB in 1993). Since then I've studiously avoided it, opting variously for (3...Nbd7) 4 f4 (or if 3...e5 then 4 Nge2), or 3 f3, or 2 Nc3 without d2-d4 at all. It's interesting... Switch the colour of every piece in the diagram and I'd be perfectly content to grind this out as "Black", so why should it be more difficult with White? I guess it's a psychological problem. Or else just me. I'm sure Magnus Carlsen would be more than happy to take the white pieces here, and as often as he possibly could.

Well, anyway, looking over my BCCA game again now, I have to say I'm struggling to understand some of my moves:

But I can't be sad (can't be sad), ’cause nine out of ten ain't bad. I even won a game with Alekhine's Defence.