“Petroff's Defence, or the Russian Game, is an extremely peace-loving opening. By choosing a symmetrical move, Black is as much as saying: whatever you do, I'll follow you; I'm a meek and mild-tempered fellow.

“If White responds to Black's peace initiative, then the moves flow like water off a duck's back – a dozen exchanges, and the clocks are stopped. Draw.

“But White has only to show a touch of arrogance and obstinacy, and go in for an open fight, when Black immediately replies blow for blow, and then for a long time it is difficult to say who is attacking and who is defending.

“But that rarely happens. More often White complies; one exchange, then another – and then the judge rushes to the table....”

Such was Bronstein's witty description of the Petroff back in 1970. Nowadays, even if the draw percentage remains high, White is generally unwilling to concede one quite so easily. Thus Black is obliged to demonstrate the opening's fighting qualities, as in the game below.

This followed a then topical variation with 3 d4 and 7...Qh4, which seems now to be a theoretical backwater, almost a historical footnote. White prefers 3 Nxe5 five or sixfold over 3 d4 – and 3 Nc3 too is seen nearly three times as often. Even when 3 d4 is brought out, subsequent play hardly ever gets as far as 7...Qh4, which features in just 0.002% of recent Petroff games.

Nevertheless, an “open fight” duly ensued, with both sides pushing their pawns forward vigorously, and a wholly correct exchange sacrifice led to a material imbalance of rook vs. bishop and pawn. 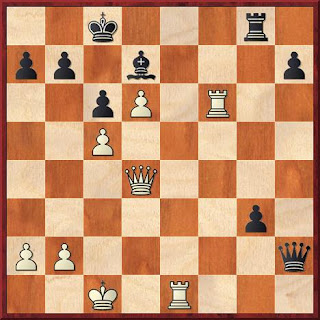 In this position Black's bishop (hiding behind the white d-pawn) safeguards his king, and the advancing kingside pawns should give him sufficient compensation, whether or not queens come off. In the end, all the major pieces left the board, and the g- and h-pawns were traded for White's c- and d-pawns, to leave a pure rook vs. bishop endgame with three vs. two on one flank.

As Averbakh showed many years ago, Pa5, Pb6, Bc6, Kb7 is a fortress even without the black c-pawn. So all that remained was for the metaphorical judge to rush to the table.