Back in my very first post, I mentioned that my pet lines include the Calabrese Counter-Gambit (2 Bc4 f5!?), Wagenbach King's Gambit (2 f4 exf4 3 Nf3 h5!?), Traxler Two Knights (2 Nf3 Nc6 3 Bc4 Nf6 4 Ng5 Bc5!?), and Jaenisch Ruy Lopez (2 Nf3 Nc6 3 Bb5 f5). Subsequent posts have featured two or three of each of those so far – with the exception of the Traxler (aka Wilkes-Barre Variation), so here's one of those now, which also fits into the ongoing Material Imbalances theme. 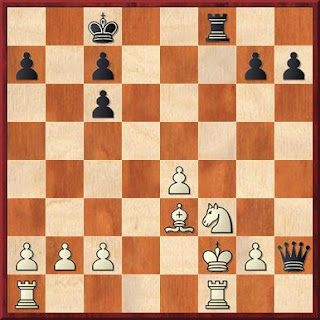 In the diagram position, the titled piece configuration is only temporary. Black can quickly regain the e4-pawn for a start, while another game (Holzner-Tait) soon reached Queen and Two Connected Passed Pawns vs. Two Rooks and Bishop – which I lost. As it happens I seem to be the only person to lose (and lose twice) as Black from this position, though the other games in the database hardly represent best play either.

Black has tried a variety of moves here: 20...a6, 20...Qh4+ (going for the pawn straight away), and the anodyne 20...Kb7 (my choice). That move looks bizarre to me now. White is getting close to consolidating the kingside and I'm bothered about losing the a-pawn?! Obviously Black should be trying to generate counterplay and, to that end, might consider either 20...h5 (intending ...h5-h4, when 21 Rh1 Qe5 has at least disrupted White's artificial castling) or 20...h6 (probably stronger), followed by ...g7-g5. Houdini marks the latter down as only slightly better for White.

In his recent book, Black Gambits 2 (Quality Chess 2012), GM Boris Alterman stops at 18 Nf3 and writes: “Black has no more attack, and White's rook and two pieces will eventually overpower the black queen.” Certainly that proved to be the case in both my games, though whether it's entirely inevitable is not so clear. All the same, the standard 7...Qh4 is probably the right way to go.