018. All Rook Endgames are Drawn

For five years now I've been playing an ongoing series of friendly games on Chess.com against someone under the name of “tripoduk”. I generally visit the site first thing in the morning, make a couple of quick moves, and go away again. As my opponent is much weaker than me, and as I don't play against anyone else on Chess.com, my win-to-loss ratio is very high indeed. In fact there have been no losses at all, and when I'd racked up a score of +89 =2 -0 (98.9%), the site administrators decided I must be cheating and banned me – albeit only temporarily. Once I'd explained the situation to their satisfaction (CC-SIM vs. relative novice), they let me back on under a new name and gave me a Diamond membership too as a titled player. Well, grand.

Since then we've played another 41 games, the score in which is currently +32 =9 -0 (89.0%) in my favour. Still no losses, but you'll notice that my percentage has decreased somewhat. My opponent is getting better. And in the game below, he should have had me.

In our most recent game, my opponent repeated the last of those variations – and much more strongly. After his 12th move I was struggling to find any compensation at all for the sacrificed pawn. I continued struggling to find any as the game progressed, and watched rather helplessly as my position declined from worse to bad to lost. In the diagram below, White is completely lost. 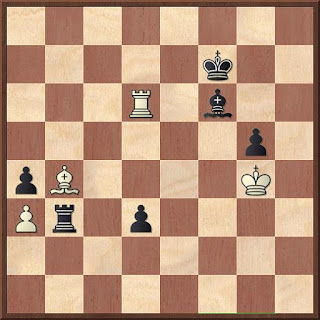 The logical plan for Black now is to trade the g-pawn for the white a-pawn, swap the bishops off in the process, and win the rook endgame with two extra pawns.

As it happens we've just started another game with the same line (up to 8 Be3 so far), so I'll have to find an improvement pretty soon. Hmmm.