014. Losing With Someone Else's Moves

The converse to Winning With Someone Else's Moves is losing with them. In correspondence chess this mostly occurs when you haven't prepared properly: when you play an opening variation with which you have very little experience, following someone else's analysis that you haven't checked.

In the BCCA Centenary GM tournament, I decided (for some reason) to abandon my usual repertoire and play "sensible" main lines; e.g. 1 d4, 2 c4 as White, the Semi-Slav and Ruy Lopez as Black. The fact that I was extremely busy around then and unable to concentrate on my games is not an excuse; it just makes my decision more ridiculous. I was consciously playing positions I didn't understand, against strong opponents, without even the time to study them properly. I duly came last on 3½/14 without winning a single game.

The one below is a case in point. I ventured the Marshall Attack against the strongest player in the tournament, CCGM Robin Smith, without having done any specific preparation, and without ever having played it in a serious game before. Reaching the basic tabiya after 13 Re1, I suddenly had to decide what to do next. In a recent-ish issue of Chess Informant (#89), I came across an interesting consultation game (between two teams of OTB masters, played by SMS text messaging), which continued 13...Bf5 14 Qf3 Re8 15 Rxe8+ Qxe8 16 Nd2 Qe1+ 17 Nf1 Bg6 18 g3 b4 (a theoretical novelty) 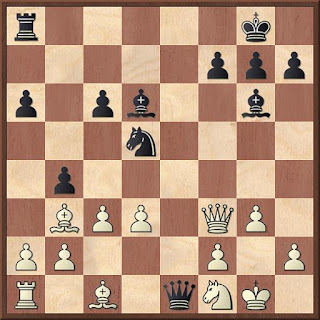 However, there was also a one-move bracketed note: 19...Nc7, with the accompanying text “!?= Radjabov, Bacrot”. That is to say: interesting, equal, and suggested by world-class grandmasters Teimour Radjabov and Etienne Bacrot. Okay, great, I'll try that. It even sets a little trap: 20 Qxc6?? Bd3 21 Qg2 Re8 and Black wins with ...Bc5 and ...Re2. Hurrah.

A CCGM is not, of course (underlined seventeen times), going to fall for that. Instead, Robin came up with something much stronger: 20 d4! c5 (there's no ...Bh5 here) 21 d5 Re8 (otherwise Ba4 and Qe3 follows) 22 Bd1!, breaking the pin on the c1-bishop and allowing White to drive the black queen away with Bd2 as necessary. Black now has nothing for the pawn, the now connected passed pawn. Several precise, grandmasterly moves later, I resigned.

As it turns out, there was nothing much wrong with Nataf's analysis. Black has since done perfectly well, answering 19 c4 with 19...Nf6, but playing 27...f6! (rather than 27...Bf8) at the end of the above variation. And Peter Svidler scored an impressive victory as Black against Vassily Ivanchuk after the similar 19 h4 h5 20 c4 Nf6 (where 21 Bd1 did not prove to be anything like as strong).

So, perhaps the title of this post was not the most appropriate. It should perhaps have been ‘Losing After Someone Else's Moves’. Even if I might point to 19...Nc7 as someone else's mistake, actually playing it is obviously my own fault. If you're going to give a casual suggestion (whether from world-class grandmasters or not) a test in a serious game, at least investigate it in advance. Ya drongo.

Robin went on to score an unbeaten 11/14, winning the tournament by 1½ points – an impressive result in what turned out to be his final event. He died in 2009.