As all beginners quickly learn, the weakest square in each sides' position at the start of the game is KB2 – that is f2 for White and f7 for Black – which is only protected by the king. We learn this by losing (often more than once) to sequences like 1 e4, 2 Bc4, 3 Qh5 and 4 Qxf7 mate. One of the aims of the King's Gambit, too, is to open the f-file and target this square with as many pieces as possible.

Instead, the weakest square turned out be Q2 (d7), which is covered initially by four pieces: b8-knight, c8-bishop, queen and king. In fact three of them (knight, bishop and king) were still defending it in the key position at move 31. 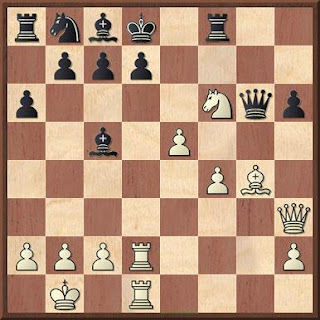 The trouble was that the knight and bishop had not moved throughout the game, nor had the a8-rook, nor did they. Meanwhile White had amassed five attackers: knight, bishop, queen and two rooks, and could theoretically add the e-pawn as well if required.

In the end, the "weak" Q2 square didn't collapse after all. But preventing that cost Black too much and he soon resigned.