003. Not the Exchange Variation

The Ruy Lopez Exchange Variation used to make me cross: 1 e4 e5 2 Nf3 Nc6 3 Bb5 a6 4 Bxc6 – Bleurgh! How can anyone play like this?! At least, that's what I thought back then. Nowadays, I often play “boring” lines myself, such as 1 e4 c5 2 Nf3 d6 3 Bb5+!. Taking an opponent out of their heavily-prepared opening system can be very effective, especially if they're fed up that you have. I lost more than one game to the Exchange Spanish largely through being fed up.

In chess, more often than not, “boring” simply means a position where you don't have any ideas. Whenever there's a variation you don't like, which you decry as “boring”, I think the most sensible course is to study it until you do like it, until you do have some ideas, and in fact there are plenty of interesting lines for Black to choose from after 3...a6 4 Bxc6. One move does not a boring game make. I didn't do that though. Instead, I decided irascibly to circumvent the issue by not playing ...a7-a6 at all. So there.

Around this time, I came across a book in a tournament bookstall bargain bin: Spanish: Schliemann (Jaenisch) by Leonid Shamkovich and Eric Schiller (Batsford 1983). (Which, incidentally, has more typos than any other chess book I've ever seen.) And on page two, there was the following diagram: 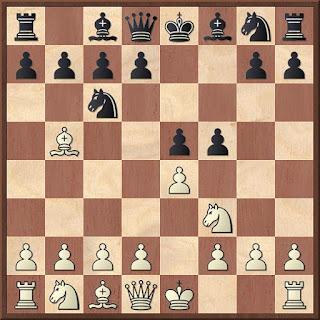 I've taken several openings into my repertoire because I liked a particular diagram in a particular book, and this one – showing the basic tabiya of the Jaenisch – was really quite appealing to me. White has played the Ruy Lopez, the Variation of Champions, and Black has just pushed the f-pawn at it disdainfully. Pah!

So how does 3...f5 avoid the Exchange exactly? What if White takes on c6 anyway? As with 3...a6 4 Bxc6, the usual recommendation for Black is to recapture with the d-pawn, and in the Jaenisch there is the additional trap 4...dxc6 5 Nxe5?! Qd4 6 Qh5+?? g6 7 Nxg6 hxg6 and wins, since the black queen defends the h8-rook backwards along the diagonal. But assuming White doesn't fall for that and plays, say, 5 Nc3 – what then? Nothing much, it seems. White can try and grind that out too, as I have occasionally done myself in thematic tournaments.

My opponent, Walter Wittmann, an OTB IM, used to play literally hundreds of postal games at a time. You can't conduct as many as that and hope to maintain a consistently high level, but Dr. Wittmann wasn't bothered. He used them purely as a means of researching and testing his OTB openings, picking CC players’ brains as it were. I guess what he learnt from this one is that 4...bxc6 5 Nxe5 Qe7 offers Black good play.

He did later try 4 Bxc6 again – in W.Wittmann-H.Kotz, Austrian League 2001. Whether he'd found a new idea for White after 4...bxc6 was not revealed, since the game continued 4...dxc6 5 Nc3, the line I was aiming to avoid. Okay, Black managed to draw without much trouble, but it certainly didn't look as much fun.