Back in 1992, when I began my tenure as editor of the BCCA Magazine, Correspondence Chess, contributed copy was scarce, as it often was, before and since (nobody got paid). So, in order to fill a few more pages of my first issue (CC#117, January 1993), I wrote the following article:

If I had to pick one book from the 1992 crop of chess literature, it would be the re-publication of Grandmaster David Bronstein's 200 Open Games. If you are ever feeling fed up with chess – disillusioned by a horrible loss, perhaps – this book is a tonic guaranteed to restore your enthusiasm.

But the most unique feature of 200 Open Games is the manner in which Bronstein presents his games. Instead of conducting the usual wall-to-wall analysis, he introduces each one with a little story bringing to life some aspect of the game or of the chess world in general.

Of course, few writers can be as gifted or as entertaining as Bronstein, but his method has the advantage of allowing an author to include games that would not normally be considered for a selective collection; for example, the twelve-move draw, Bronstein-Ivkov, Vienna 1957.

It is this approach that I would like to exploit in presenting my own Three Open Games.

The reader might consider the following game to be little more than the technical realization of an advantage. White misplayed the opening and lost a pawn without sufficient compensation. In postal chess, an error of this magnitude is usually decisive. 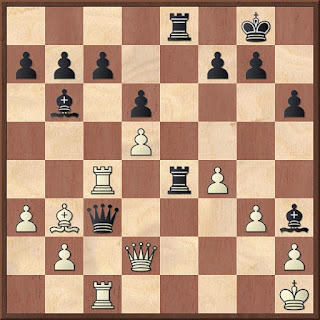 An entertaining variant of chess, other than those outlined by Malcolm Horne in CC#115, is the one known to me as ‘Scotch Chess’. The only difference in the rules from ordinary chess is that on capturing a piece or pawn, you must immediately replace it on the board – on any unoccupied square, subject to the restrictions that pawns cannot be placed on the 1st or 8th ranks and, obviously, you should not put yourself in check.

As neither player loses material, the main strategy of the game involves reducing the scope of the opposing army – usually by clustering enemy pawns towards one corner and putting pieces in behind them; e.g. black pawns at a6, a7, b6, b7, c6, c7 and bishop at b8 will form a close cage (for the queen) around a8. The extrication period can be used trying to checkmate the king.

It may have been familiarity with Scotch Chess that led me to a similar idea in the following game.

Consider the position after 11 Qd2. As compensation for White's lead in development and strong, mobile centre, Black has three extra, advancing kingside pawns. However, suppose White plays 12 Rxh4 and, after 12...Qxh4, 13 Bg5, forcing the queen down the h-file in front of the pawns, Black tries to drive away the bishop by ...f6 but White ignores the threat, allows ...fxg5, and instead manoeuvres a knight to f1, pushing the queen back to h4.

Look now at the diagram! Black's once-menacing pawns now merely encage their queen which, devoid of sensible squares, will take no further part in the game! 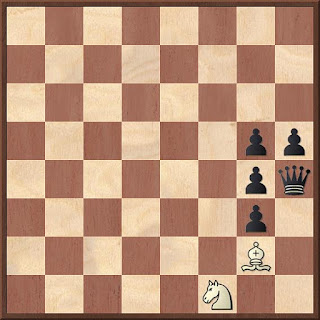 A rather fanciful idea, perhaps? No doubt the reader will find many flaws in it, but with a little help from Black, who knows? Unfortunately, Keith had other, more vigorous plans for his pawns and so carefully retreated his bishop out of their way with 11...Bf6.

As for the game itself, I have included it in my Three Open Games largely because I do not understand it and so cannot annotate it properly; but please do not be deterred from playing the game through to the end, since the final position of Black's rooks' pawns is quite unique.

Ishlinsky, when asked “is it worthwhile putting so much effort into chess?”, replied “it is worthwhile because chess gives a man more than he puts into it.”

I should expand the context of this quote to ‘he/she’ and ‘man/woman’, but it can become tiresome to do so and makes for clumsy writing. There is much to be said for the adoption of Marge Piercy's personal pronoun ‘per’ in such cases.

But never mind that! The gist of Ishlinsky's statement is clear – and how much more so for correspondence chess players! The reader will know from per (!) own games how analysis can yield amazing variations when not fettered by over-the-board time limits. However, it may be possible to get too carried away.

The following game was almost one of my favourites. After achieving a sizeable plus from the opening, I was very pleased with my play, realizing this advantage in the rest of the game. Except that, at the end, I gave up my queen for a mate that was not there.

Look at the position after 24 Nb5. 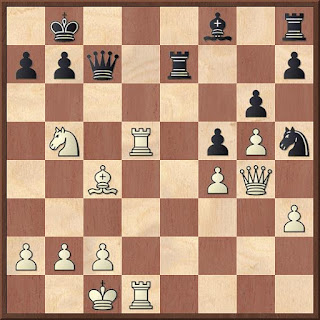 Bitter self-recriminations followed and I gave up chess for nearly a week. I hardly need to point out to you that 24 Nxf5 wins quite easily for White.

I have, I confess, occasionally thought about writing my own book: 200 Open Correspondence Games, based on my experiences at “remote chess” (Fernschach), by post (snail mail), by email, and (nowadays) on online servers. The issues with that idea are obvious: who would want to publish what is primarily a vanity project? And more pertinently: who would want to buy it?

But that's the great thing about blogs, isn't it. It doesn't cost anything to post things online, and if no one much (or at all) reads your posts, never mind, you've had fun writing them. So here it is, my new blog: 200 Open Games.

All will begin with the moves 1 e4 e5 – or transpositions thereto – the prerequisite for an Open Game. Bronstein arranged his book by openings: “The Queen's Attack”, “The Bishop's Attack”, “The QP Attack”, and so forth. I won't be doing that. Instead, I'll add tabs for opening names and ECO codes, C20 through C99 – within which I have some areas of special interest:

And the second one there in particular, since we (János and I) have been playing and analysing the Wagenbach for, what, 25 years now.